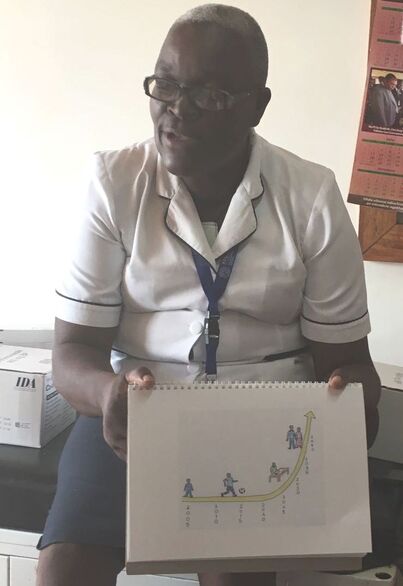 Disclosure is one of the first steps for children and families to be able to manage their health conditions. This provider is holding a disclosure session with a job aid.
”Hanna” (name changed) started anti-retroviral therapy (ART) shortly after she was diagnosed with HIV at the age of 13. Her condition improved after starting ART, but her first viral load to assess treatment efficacy drawn after six months on treatment revealed that her viral load was 14,113 copies. While demonstrating that the treatment was having an effect on her body, the results indicated an issue; if the medication was working as expected, her viral load should have been undetectable. She was referred to Chrissy Nampuluma, a Tingathe CHW, who took time to discuss Hanna’s care with her and learned that while Hanna suspected she was living with HIV, her mother had not yet disclosed her own HIV status. Hanna is a bright young woman, and she suspected she was living with HIV, but could not ask her mother openly because she was afraid. Instead, she struggled to take her medication, feeling frustrated and alone. Hannah’s situation is not uncommon among young people living with HIV.

HIV/AIDS programs globally strive to attain HIV epidemic control as stated in the 95-95-95 UNAIDs ambitions, with the third 95 aiming to ensure that 95% of those initiated on ART should be virally suppressed. To improve viral suppression, partners including Baylor College of Medicine are supporting the Malawi Ministry of Health through several district health offices by transitioning eligible patients to optimized ART regimens and scaling up differentiated service delivery approaches such as teen clubs to support adolescents like Hanna to achieve viral suppression.

The USAID-funded Tingathe program, implemented by Baylor College of Medicine Children’s Foundation- Malawi, works closely with the Ministry of Health to support provision of high-quality HIV services in 120 health facilities in 7 districts of Malawi, including the health facility where Hanna receives her care. Tingathe CHWs are trained to support children, young adults, and their guardians with the HIV disclosure process, ensuring that they are provided with age-appropriate information about their HIV status and are able to take an active role in their own care. Once youth are aware of their HIV status, they are linked to teen club, a Baylor-Malawi program designed specifically for ALHIV to build camaraderie, learn from peers, and engage in therapeutic recreation on weekend ART refill days. Teen club is facilitated by trained mentors, with clinicians and nurses providing ART refills and clinical review, adherence support sessions and discussion of life skills topics (e.g., SRH, disclosure, future planning, nutrition. Tingathe CHWs like Hanna provide intensive adherence counseling (IAC) using an approach called “IMB” (information, motivation, behavior). IAC with IMB is an approach to counseling in which the counselor assesses the client’s knowledge about their illness, asks about their motivation to take medication, and together with the client develops an approach to improve his or her adherence.

After being referred to Chrissy, Hannah was provided counseling and support and Chrissy helped Hanna to begin her journey to good health by supporting the young woman and her mother through the disclosure process and linking Hanna to teen club, where she benefitted from the camaraderie and support from other young people living with HIV. The teen club clinician optimized her ART therapy and she received adherence counseling using the information-motivation-behavior approach. Today, after being switched to a more effective ART regimen and through the support of teen club, Hanna is happy and healthy and has a suppressed viral load.

Hanna’s mother is very grateful for the support Hanna receives from her peers and providers at teen club. “She is now gaining weight at 33kgs, and healthy because of treatment support she gets from teen club.”